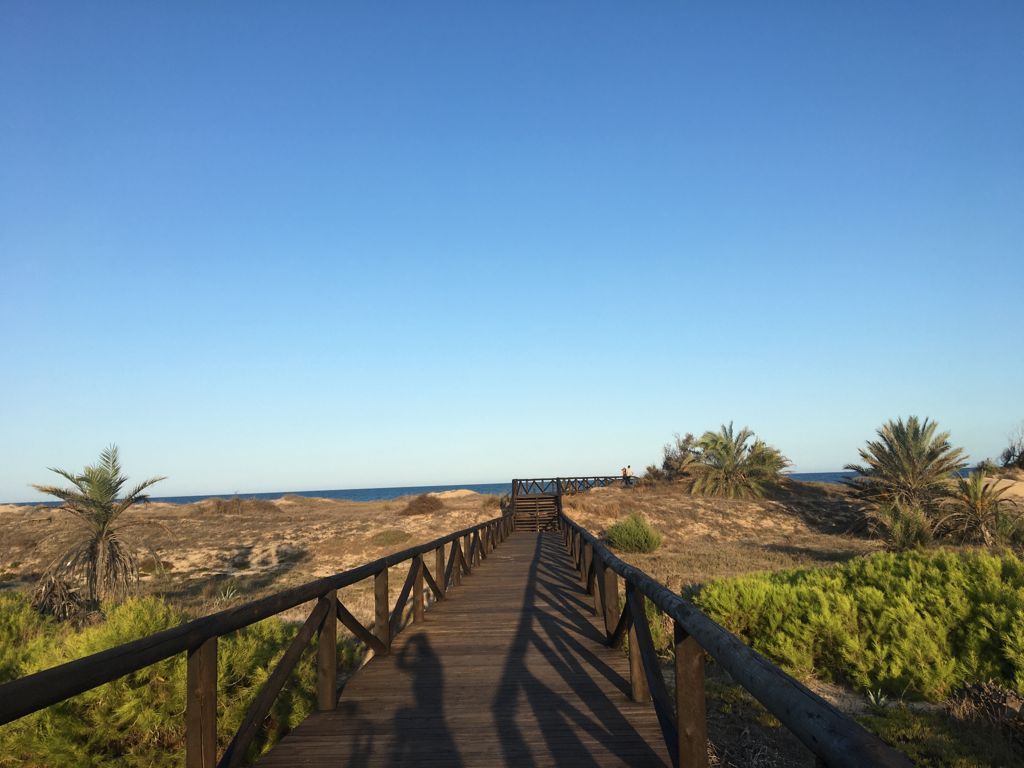 Guardamar del Segura is a municipality of the province of Alicante located at the mouth of the river Segura in southern Valencia, Spain. It is a Mediterranean resort, with a large pine forest abutting an 11-km-long beautiful white sand beach.

Historically an area of fishermen and farmers, Guardamar del Segura is the southernmost point where Valencian is spoken. A Phoenician colony, called Herna by Roman geographer Avienus in his book Ora Maritima was the first settlement near the mouth of Segura river, in Spanish, “guardar” means “safekeeping” and “mar” means “sea”, and this is another possible basis for its current name.

Guardamar has a mild Mediterranean climate. The coastal region is delimited from central Spain by the Betic Cordillera and thus represents the driest area of ​​the Iberian Peninsula. The entire landscape and vegetation clearly shows African features. The sea temperature is 28 degrees in summer, the daytime temperatures are around 30 degrees in summer and 16 to 18 degrees in winter. Guardamar’s coastal location also guarantees a welcome sea breeze in summer, while in the hinterland, in the cities of Orihuela and Murcia, there is great heat during the day, which drives the residents to the summer freshness of the coastal towns.

The fine sandy, eleven-kilometer-long beach of Guardamar is considered one of the most beautiful in Spain, not least because of the long pine forest that runs parallel to it.

Guardamar is particularly known for its Pinada de Guardamar in the dune landscape. The pinada is an extensive pine plantation from the beginning of the 20th century that stopped the migration of the sand dunes on the beach. The forest on the coast had been cut down since the 18th century. The wood was used, among other things, for warships. The deforestation was gradual. The consequences were huge in the 19th century. A wave of sand grew from the bottom of the coast and the shifting dunes soon engulfed Guardamar’s first houses. The consequence of human intervention in nature had been increasing soil erosion, which was further promoted by the alluvial sand of the Segura estuary and the strong east winds.

Over the centuries the sand eventually formed dunes that were so high that from 1896 onwards they put the northern parts of the village in danger. The city would have ended as silted up Atlantis had it not been for civil engineer Franco Mira y Botella, a well-known Spanish landscape engineer from the Alicante region. In a laborious project, he had trees planted to protect the village from 1897 and the dunes fortified with underground walls. Most of the Pinada de Guardamar, which today comprises 800 hectares of dunes, was reforested with pine, palm, cypress and eucalyptus trees in order to prevent the steady penetration of the sand dunes. The forest was the salvation of today’s city. Today it is considered to be their most precious legacy and trademark.

The pinada made Guardamar a popular destination on the southern Costa Blanca. Nowhere else between Alicante and Cartagena can such kilometer-long and natural dune landscapes be hiked on long walks. The dunes are now in a nature reserve. It is primarily two large parks that make the community so attractive. The green areas Parque Alfonso XII. and Parque Reina Sofia attract thousands of visitors year after year – for hikes, picnics in the countryside, jogging or walking.

Like many regions along the Mediterranean coast, the city has been heavily influenced over the centuries by a wide variety of seafaring cultures. In the municipality of Guardamar del Segura there have been various archaeological finds that indicate a Phoenician and later Iberian settlement. There was also an Islamic rabat, an Islamic border fortification.

The Phoenician colony of Alonis is considered to be the oldest settlement in Guardamar and is particularly rich in archaeological finds. The remains of this Phoenician port city, still visible today, date from the 8th century BC. A wall from the time of the Phoenicians was found in the archaeological site of La Fonteta. This was four meters high and ran parallel to the coastline. Its construction is dated to the seventh century BC. The bricks are in incomparably good condition. In some you can even see fingerprints. The Phoenicians came from the Middle East (today’s Palestine, Lebanon) and settled the Spanish coast before the Romans.

An important find from the Iberian period is the famous Dama de Guardamar. The archaeological museum shows the excavations of the area in a permanent exhibition and as its showpiece the more than 2,300 year old “Dama de Guardamar”. The Iberian bust was discovered in 1987.

Later the Arabs called the place وادالرمل “Guad-al-ramal” (“Sand River”), from which the current name probably comes. In Spanish, “guardar” means “to keep safe” and “mar” means “sea”, which is another explanation for today’s place name. In the dunes of Guardamar del Segura is the first and oldest site of an Islamic ribat in Spain, i.e. an Arab border fortification in the immediate vicinity of the coast. These are the archaeological sites of La Fonteta and La Rabita. The fortresses, of which only the foundation walls remain today, date from the 10th century AD and were discovered in the 1980s. The University of Alicante is currently planning an exhibition project there to make the finds accessible to the public. In ancient times, not only Arab soldiers ready to fight lived in the fortress, but also Islamic scholars who gave the fighters moral support. The architecture of La Rabita shows monk cells on the lowest floor of the fortress, on the second floor there was a mosque with the towering tower. Together with the ribat from Sousse in Tunisia, La Rabita is the oldest of its kind in the Mediterranean.

Between 1244 and 1248 Alfonso X the Wise conquered the area around Guardamar for the Crown of Castile, although the Muslim population was not initially expelled. However, a revolt by the King of Murcia in 1264 resulted in the expulsion of the Moriscos in retaliation. A few years later, in 1277, King Alfonso X founded the Christian Guardamar del Segura on the site of today’s “Castillo” on the castle hill. The king founded it as an independent community with the same government laws and privileges (fueros) as the city of Alicante and brought the first settlers from Catalonia and Valencia to the Levant coast as thanks for their resistance against the Moors. For this reason Guardamar is still one of the southernmost cities in which Valencian is sometimes spoken.

At the beginning of the 19th century, a small group occupied the place and proclaimed the constitution of 1812, led by the Bazán brothers. The expectation that the entire Vega Baja would rise up against Fernando VII was disappointed.

On March 21, 1829, a severe earthquake claimed numerous lives. It had a magnitude of 6.6 on the Richter scale and resulted in 389 deaths in the comarca of Vega Baja del Segura. It destroyed more than 2000 houses in the comarca. Over 3000 people were homeless in the Comarca Vega Baja at that time. The earthquake completely destroyed the medieval town on the castle hill in Guardamar. The Moorish Castillo de Guardamar, the castle complex from the 14th century, and the much larger lower town center with its Gothic city wall from the 16th century were almost completely destroyed. The place had to be completely redesigned and rebuilt from scratch below the castle hill. The new Guardamar was planned in the neoclassical city style (straight streets in a vertical north-south orientation and three symmetrical squares). The new construction of the houses should withstand future earthquakes, so that one built low houses with large inner courtyards. The old town was used as a quarry for the new Guardamar. Guardamar was in the 19th century, due to its orthogonal arrangement, like modern Japan of our time, as particularly earthquake-proof. With the exception of the city’s architectural planning and the old castle ruins, there are hardly any traces of the great earthquake.

At the beginning of the 20th century, pine trees were planted to prevent the sand dunes from penetrating. The sand dunes invaded the place and threatened to bury the houses. The first tourists came to Guardamar in the 1950s. Tourism is the most important economic factor today.

This month the so-called Dama de Guardamar half marathon takes place, which consists of a run through the streets of the village over a distance of more than 20 km and is prepared for people of all ages with categories for adults and children.

There are 9 brotherhoods in the town of Guardamar that take part in the processions and stagings of the death and passion of Christ. These representations are carried out by volunteers from the 9 groups who organize and prepare Holy Week with great illusion and devotion. The most important are: “The entrance of Jesus into Jerusalem”, on Palm Sunday; “Prayer of the Garden and the Seizure”, on Easter Monday; “Pilate’s washing”, on Easter; “The Meeting of Veronica”, on Good Friday. In addition, we must highlight the music offered by the drum bands and cornets of the brotherhoods themselves throughout the week. We are talking about a practice that has become very important until more than 600 people take part each year. The following Monday called “Easter” is customary to eat the famous “mona” sweet sponge cake in the pine forest of the village, which is very typical.

At the end of the month, the much anticipated year-round festival is celebrated in honor of the local patron saint, San Jaime. These celebrations commemorate the Christian reconquest of the Muslims. As every year, the festival begins with the announcement of the celebrations and the presentation of the legend of “La Encantá”. During the festivities we can dance in the Barraca Popular and in the cuartelillos and kábilas of the various comparsas. The messages and parades of the Moorish and Christian sides are undoubtedly the most spectacular moments of the festival, when the story of the Reconquest is revived. Music and fire (with the Correfocs, the water fireworks locks, the Mascletà, etc.) are the protagonists of this festival.

In September, the festivities of Campo de Guardamar begin in honor of the Virgen del Rosario de Fátima, patron saint of the residents of Campo de Guarmadar. It all starts with the launch of rockets at night, in the auditorium of Campo de Guardamar, the proclamation and then the coronation of the youth and children takes place. The first day of the celebration ends with a folk dance.

Any cookies that may not be particularly necessary for the website to function and is used specifically to collect user personal data via analytics, ads, other embedded contents are termed as non-necessary cookies. It is mandatory to procure user consent prior to running these cookies on your website.